Let’s roll back the clock to 1992. When you were working on most systems, you had at least one CRT monitor. If you were super lucky, you had two, because screen real estate makes a big difference for writing code. I much prefer a dual head system over a single for developing and testing code just for being able to have documentation up on one screen and code on the other, or test rigs on one and source on the other. 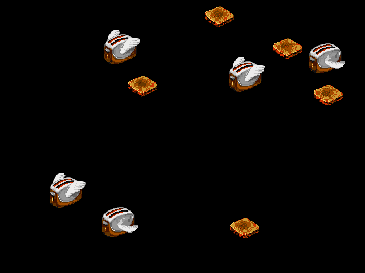 At Adobe when I was in the printer division, I had single head machines. First a Sun workstation with a black and white screen and then later a DECStation 3100 with a color monitor.

When I moved to Acrobat, I was given a Macintosh IIcx and a black and white monitor. With some cajoling, I managed to get an outboard hard drive and a small color monitor.

The Macintosh had dull support in the OS for multiple displays, but not all applications dealt with it gracefully, because although the support was there to render no matter what, you usually want to do something different on a 1 bit display than on a color, and when you span several bit depths, it gets harder. I mentioned earlier that Joe Holt had put together a nifty chunk of code to make that much easier.

If you had a CRT, then chances are you ran a screen saver to keep the display from getting an image permanently burned into it. On the Mac, Berkeley Systems capitalized on this by writing a screen saver framework and people wrote all kinds of plug-in screen savers for it. Berkeley Systems put together special packages, some with themes, and sold those too. I ran the Simpsons Screen saver on my machine, usually the Itchy & Scratchy screen saver, which was truly inspired. They hooked into the Finder to get your desktop layout and Itchy uses all kinds of Finder items to kill Scratchy. And oddly enough, more screen savers honored multiple monitors well than typical desktop apps.

Berkeley Systems also ran contests where programmers would compete for some serious prizes. The nice thing about Adobe at the time was that it was chock full of creative people. For example, Harrison Page wrote a screen saver called “Botheration” which played sound samples picked at random from a collection at random intervals. For example, one such sample was Harrison saying, “Hey, Dan?” and other similar things to annoy the people who shared cubes around him. I’m surprised that Dan didn’t wound Harrison.

One day, I stopped by Ed Hall’s office and saw that he was running a screen saver on his Mac that looked every bit like an MS DOS machine. When the screen saver started, it imitated a DOS boot including a fake memory test that reflected how much memory was installed. Then it auto-typed DOS commands, wandering around your file system, listing directories, printing the date and time and so on.

This site uses Akismet to reduce spam. Learn how your comment data is processed.